I arrived back from Patagonia and Antarctica more or less unscathed except for the odd plop of penguin poo. (patagonia-antarctica.blogspot.com)
The note under the door after five weeks on ice was a clue - 'Your security system's gone to Queensland droving and we don't know where it are!'
Next morning neighbors related the story of the big boom in late October which fried various big screen TVs, videos and assorted micro-processor thingies.
Since then, we've been replacing security systems, modems, Mac computers and telephone cables. 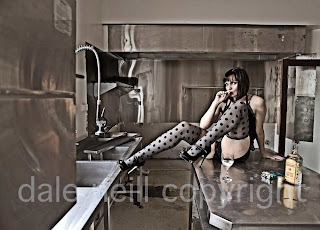 Then the dark clouds parted and a shaft of God light appeared and a voice from Canberra said 'This is the National Portrait Gallery here and we'd like to hang one of your portraits in 2012.'
Halleluhia!
This shot here is not the one. You have to wait until 15 march 2012 to look at that here but this is one of my favourite boring images. Boring model, Pam Jackson in the derelict and boring kitchen of what is now The Crowded House restaurant. Crowded House make the best coffee in all of WA. (BTW Pam not all that boring).
Posted by Dale Neill at 05:58