FISH Eye on a FISHY Eye 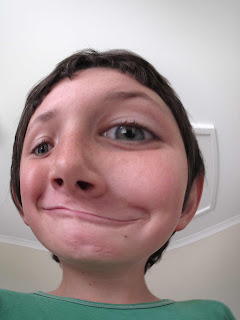 Well, here's a dead certain way of getting a Deadly Boring image of mother-in-law or federal politician.
The Canon Ixus 1100 HS is a budget compact- about AU$400. If you want to keep the kids amused for hours and develop an interest in photography, you could do a lot worse.
My grandson used the fish-eye feature on the IXUS to create this cartoon like image of himself.
To buy a regular fish eye lens for your DSLR is gong to set you back many hundreds of dollars maybe even thousands.
Posted by Dale Neill at 01:03 No comments:

Turn your CAT into a WOMBAT 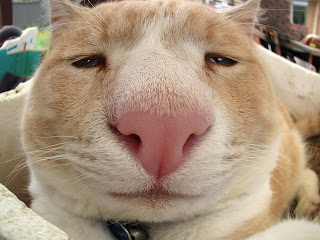 Is this a miracle or what? I heard someone once turned water into wine and a mate of mine once turned into a  one-way street but turning a cat into a wombat without performing radical surgery is pretty nifty. Actually, I didn't do it myself; my eleven-year old grandson performed this feat of magic using his new Ixus 1100 HS - Fisheye. He told me his next trick was to turn me into a generous Grandad. Ha!

I watched SBS news a few weeks back and the thought police had been hard at work. Three of the five bits of vision had had sensitive bits pixelated out. Its fashionable to edit out people who are certain ages, genders, colours and religions. Pretty soon we'll be editing out house bricks and marsupial mice.
This Aussie beer ad for Matilda Bay Brewery - Fat Yak Pale Ale cashes in on this very nicely.
So photographers, put your left field caps on. rather than just 'copying' a sign or ad, interact with it and record the interaction.