I had organised what I thought was one of the best practical 'cons' on  a group of 150 photographers for Light Fantastic 2007. I had spread the word around that USSR photographer Professor Betcherovka would present his famous PTFBS* (Russian) technique. Local amateur actor Gary Lawrence had researched the background, written the script and had the costumes and make-up ready.

We had even dummied up photographs of Betcherovka's Moscow university and Gary standing next to USSR president Nikita Krushev. Professor Betcherovka would be accompanied by an attractive but stern ex GDR (East German) assistant Gretchen to translate for him.


All seemed going well for the giant con. But two female applicants for the role of Gretchen read the script, got to the last two paragraphs, looked perplexed ...  and declined. The script called for Gretchen to dress formally but in the last 30 seconds she was to shed her elegant black dress to reveal a red bustier, stockings and stilettos to 150 photographers. 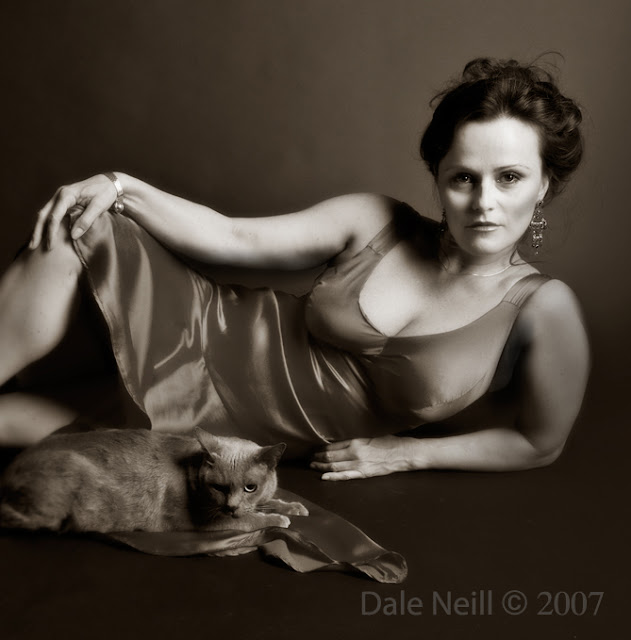 With a week to go I was desperate. Then one of the applicants who declined suggested Alex Spargo. I met Alex and liked her immediately. She read the script and loved the role. Alex was used to being on stage and in front of cameras. She was formerly a body builder and had modelled with Arnie Schwarzenegger.

Gretchen and Professor Betcherovka were a huge hit at Light Fantastic 2007. Almost every photographer there was convinced they were the real thing. The con was disclosed when Professor Betcherovka asked 150 photographers to stand in the tiered auditorium and hold their cameras up.  The Professor then proclaimed that his PTFBS technique was an acronym for press the fucking button stupid! There were gasps of 'Oh no!' as the penny dropped.

'Gretchen' wiggled out of her elegant black dress, loosened her hair from its formal French roll and posed coquetishly in her red bustier. The good 'professor' invited all 150 photographers to photograph his assistant 'Gretchen'.

In ensuing months I met Alex's faithful companion Bronson who travelled with her absolutely everywhere in her little British Racing Green MGB. I was lucky enough to do a shoot with Alex and Bronson in the studio. Alex has also modelled for several of my UWA classes and private workshops.


Join me for Photographing Faces at UWA Extension.