Better than an orgasm

'Everyone up by 3.30am. See you in the morning'
Groans, moans 'It'd better be good' ... more moans and groans.
'This isn't a holiday, this is photography', I say
'You haven't come all this way to take a tourist shot!'

We're in the south of Egypt, after two days drive across the desert; here we are on the edge of the Great Sea of Sand, a half day camel ride from the Libyan border. We are a  long way from the Nile. Talking of camels, we've all done the obligatory camel ride that afternoon. We have a better understanding about the schoolboy book title The Hundred Mile Camel ride by Major Bumsore!

Siwa is a tiny oasis town that Egypt and time almost forgot. The Egyptian Government did forget! Paved roads are a novelty, so is electricity and running water. My taxi is a  donkey cart driven by an entertaining  14 year old year old boy called Gomer. He beats his donkey repeatedly with a heavy stick. I ask him to stop hitting the poor donkey. He smiles and ignores me. I then tell him that if he doesn't stop I will get out of his 'taxi' and not pay him.Gomer beams a happy smile  'Its alright, its retreats from beating his donkey and taps her lightly instead. 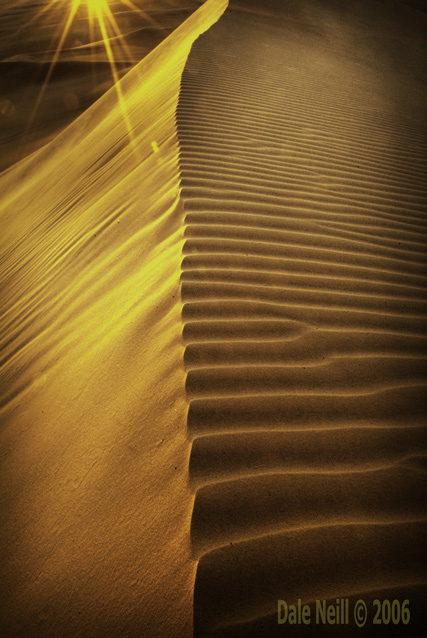 Every woman  in Siwa is shrouded in a full burka. Its near impossible to see any part of the face let alone make eye contact. My one attempt to photograph a woman results in me being threatened by a teenage boy with a wooden club. I avert a confrontation when an adult shouts in Arabic and warns him off.

Because of Siwa's isolation there are rumours  inbreeding has created problems. I spot a number of kids in the back streets who give credence to the theory. The village elders have decreed a twice annual festival where young people from faraway towns meet for games and 'cultural exchanges' in a  quest for better cross breeding.

Next morning its dark and minus 4 degrees C. My photographers huddle around the 4WDs with their cameras and tripods. Our Bedouin divers fancy themselves as a cross between Juan Manuel Fangio and an extra from Lawrence of Arabia.

Fifteen minutes later we are hurtling through pyramid-sized dunes at breakneck speed in pitch black. Egyptians believe its an insult to drive with lights on! When we stop I inspect the surface with my petzel light and say 'No, too many tracks. I want NO tracks. Let's go.'

We surge. I have no idea where we are or what direction we are going. As long as I'm on the Egyptian side of the border I'm not worried. We drive and swerve and slide in the sand another fifteen minutes all in darkness
'Stop here, this is it!' I yell.

The sky has brightened from starry black by only a quarter of a stop. I still can't see my hand in front of my face. Its time to find a position. Walking in fresh blown dunes is akin to walking in thigh-high viscous honey. Six steps forward results in moving just half a metre. In 10 minutes I'm breathless; my heart's racing and I'm using my tripod as a crutch.

Forty minutes later the 'big star' shoots rays above the rim of the dune. From the valleys between the dunes the moans and groans are replaced with shrieks of delight and 'Oh My God'. I here shutters clicking in the stillness. Someone calls out 'This is better than an orgasm'.
I adjust for a hyperfocal distance shot.
1/10 sec @ f22 200ISO, Nikon 12-24 lens, Fuji S3 Pro

Learn how to get everything sharp from 0.5 meter to infinity in my UWA Intermediate course in 2013.